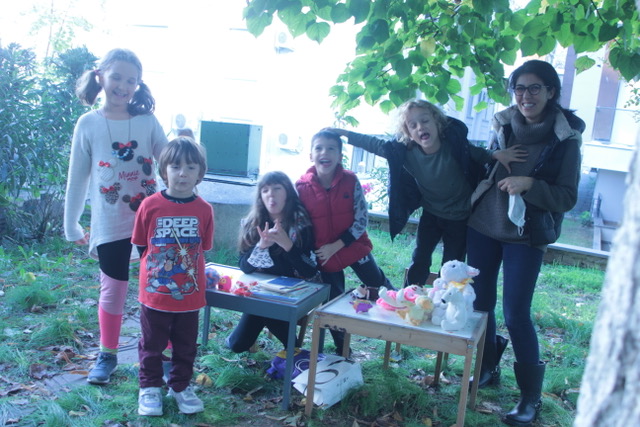 I have been creating for and with children since 2003. These creations have sometimes appeared in the form of theater, sometimes as drama, and sometimes in the form of children’s books. Nowadays, with the support of Project Zoom, implemented by Impact Hub and the US Consulate General in Istanbul, I am organizing activities related to the children’s book Kreta the Time Traveler.

Kreta the Time Traveler is a sci-fi book that focuses on the impact of our consumer habits on the climate crisis. We travel with Kreta and their best friend Shiva from the future Earth to today’s Earth to send a video message that suggests solutions to the climate change that has already become a crisis. The project consists of a book, a video, and barter market activities. I aim to organize barter markets in order to enable children to experience the concepts of second-hand goods and sharing.

I conducted research and carried out a trial experience with children in order to complete the whole process with the meticulousness I wanted. The first step was conducting interviews with guidance counselors. In these interviews, we discussed how we should tell children about the climate crisis. You can read these interviews at this LINK.

After finishing the research and writing phases, I organized a mini barter market event with my daughter and her friends in our neighborhood, in order to test the third phase of the project. My aim was to gauge how the younger generation, who have become more individualized and possessive than older age groups, approach concepts such as bartering, second-hand, and used goods, and how they evaluated the barter market activities that I would implement with the book.

The subject of this essay is the process and results of this enjoyable experience. The event was held with five children aged between four and nine. Two of them were girls and the others were boys. All the children in the group were from middle income families, and their parents were university graduates. All of them were attending school except for one four-year-old boy. They all live in the same neighborhood and play together, spending time together and with me.

When I first told the children about barter markets, they got excited. They made a link with money and shopping, and thought of the barter market in connection with the charity bazaars previously held at their schools. Although I told them that we were not going to use money, they did not lose their excitement. Then we decided on the place and time, and I asked them to bring three items to exchange.

On the day of the event, my daughter and I prepared snacks and a banner, placing them in the garden of our apartment. The children liked the atmosphere we created for them, and they organized the barter tables together by sorting the wares. They mainly brought books, toys and accessories. After placing the wares, they chose what to take.

The most exciting part of the bartering for me was how the children would give up their things and behave when they chose the same item as another child. It took longer for the boys than for the girls to say goodbye to their wares. When they wanted to take the same item, they persuaded each other in their own way, without arguing. One of the children who took too many toys even gave a toy to a friend who had never taken it.

After finishing the exchange, we started a chat, which I guided by means of questions. My first question was the meaning of “barter”, which the children all answered correctly. My second question was how they felt while they were exchanging items. The boys responded to this question by saying, “We didn’t feel anything at all,” while the girls said they felt good. When I asked what they thought about using their friends’ wares, they told me they could do it. Then we talked about second-hand clothes. Their initial reaction was negative, but in the end, they noticed that they had already been using second-hand, or even third-hand, clothes from their relatives. They told me that they could wear clothes from people whom they know, not from strangers. We finished the activity by playing a game.

I observed that children comprehend and implement the concepts of second-hand goods and bartering quickly. The story of the sweater that I was wearing, which a friend of mine gave me, affected the children in the trial group positively. I noticed that when children see an example from real life, they accept things more easily.

This process, which we experienced together, turned out to be a very effective means of verifying the project and investigating the concepts mentioned above with the children. And an excellent question was asked afterwards: “Shall we do it again, Auntie Gülşah?” Yes, we can talk about and do everything with children when we find the right method of communication.